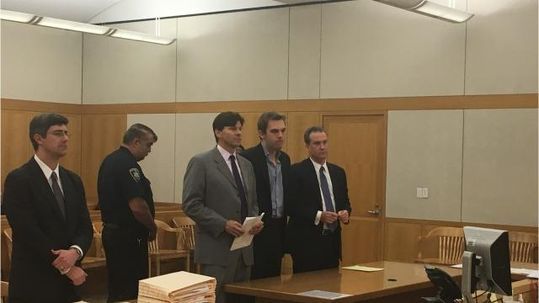 On the eve of starting one homicide trial, Pappalardo & Pappalardo, LLP appeared at the arraignment for another client accused of homicide.

On Thursday, October 19, John D. Pappalardo and Daniel Mentzer appeared in the Westchester County Court before the Hon. Anne Minihan with client Christian Walczyk, who entered a plea of “not guilty” to the charges of Manslaughter in the First Degree, Criminal Impersonation in the First Degree, and Criminal Possession of a Weapon in the Fourth Degree. Walczyk is charged with the killing of Daniel Siino in May of 2017 in what has been called a “road rage” incident.

According to the police, Mr. Siino and his wife were driving on the Taconic State Parkway in Mount Pleasant when Walczyk pulled in front of them and refused to let them pass. Mr. Siino pulled his vehicle over, and both he and Walcyzk got out of their vehicles. Walcyzk is alleged to have flashed a fake police badge before fatally stabbing Mr. Siino twice in the chest.

Earlier in the day, Pappalardo & Pappalardo, LLP appeared before the Hon. Barry Warhit in the Westchester County Court with client Jason Myers, whose homicide trial is scheduled to start next week. Myers is accused of Murder in the Second Degree, Strangulation in the First Degree, and Concealment of a Human Corpse relating to the August 2016 death of Myers’ girlfriend Ashley McDuffie. According to police, Myers confessed to the killing; Myers is said to have strangled Ms. McDuffie after a heated argument at her apartment in Mount Vernon before dumping her body in a wooded area in the Bronx.