In 2017, Governor Andrew Cuomo signed into law legislation raising the age of criminal responsibility in the state of New York. The new laws affect many, as nearly 28,000 juvenile offenders in New York each year are arrested and face the possibility of prosecution as adults in criminal court.

Called “Raise the Age” legislation, the purposes of such reforms are, among other reasons, to keep kids out of adult jails and prisons, to help troubled youth with rehabilitation, and to avoid giving kids criminal records that will last for the rest of their lives. Additionally, there has been a growing recognition that juveniles are more likely to make poor decisions due to brain development. Further, juvenile offenders are less likely to recidivate as they mature.

Yet critics say New York’s reforms may not actually be making things better. Juvenile offenders are still getting “into the system,” and the punishments have, in some respects, become harsher for youths who commit crimes. Further, the costs for youth alternative programs are spiraling higher and higher. Juvenile facilities that have long been closed are now re-opening, with youths living in prison-like conditions.

As of October 1, 2018, the presumptive age of criminal liability has been raised to 16 years old. On October 1, 2019, that will go up to 17 years old. Any time a child is arrested, his or her parents must be notified. Further, any questioning of the child by law enforcement must take place in an age-appropriate setting with parental involvement.

The way cases for 16- and 17-year-old juvenile offenders has also changed, depending on the nature of the charges, as demonstrated in the diagram below. 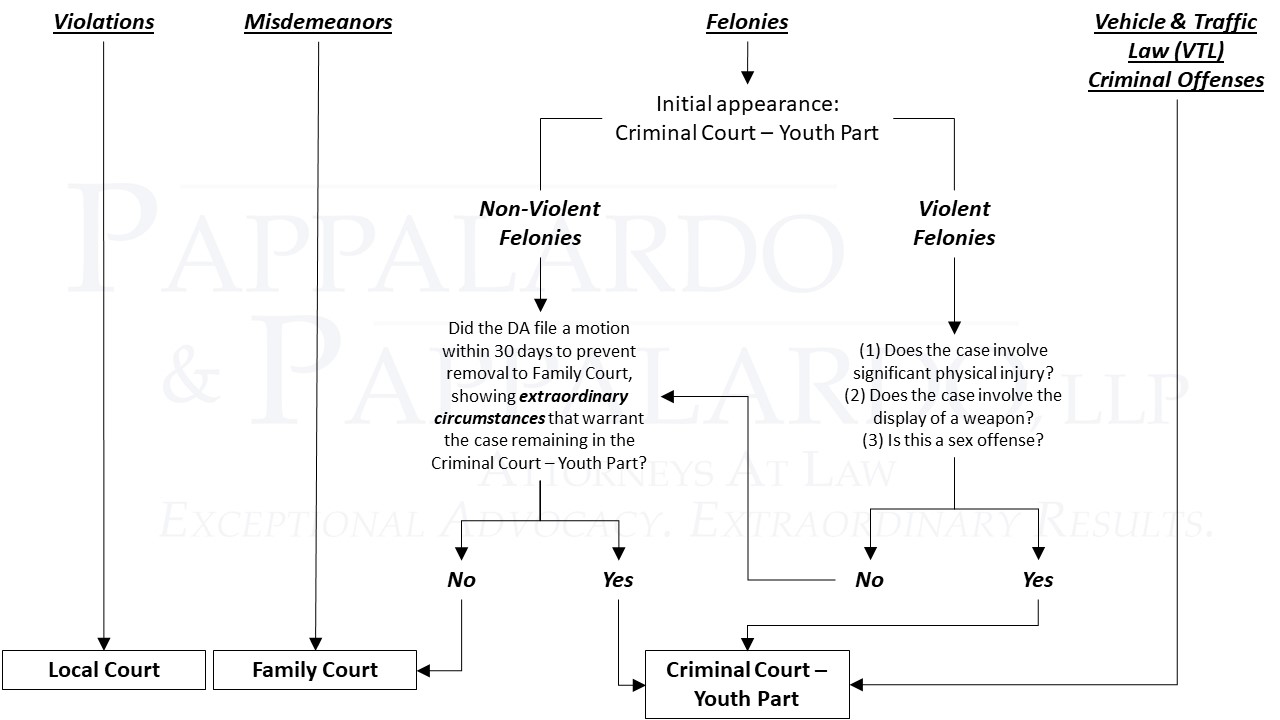 In addition, the laws regarding the sealing of convictions for juvenile offenders were also amended. Further, youths will no longer be held in facilities with adults. Rather, children with cases pending in family court will be held in facilities run by the NYS Office of Children and Family Services (OCFS) or the NYC Administration for Children’s Services (ACS), or in Close to Home housing. Adolescents with cases in criminal court will be held in specialized secure juvenile detention centers. Youths sentenced to state imprisonment will be housed in facilities developed by the state, managed by OCFS, and secured by the NYS Department of Corrections and Community Supervision (DOCCS).

Will Prosecutors Embrace the Changes?

While giving youth more options to change their lives for the better is a noble intention, there are problems with New York’s new system for juvenile offenders. To begin, there is still wide discretion given to prosecutors on how juvenile offender cases are handled. Many cases involving young defendants may still be prosecuted in criminal court. These include cases involving use of a weapon, physical injury, and sex offenses. Further, a prosecutor may argue there are “exceptional circumstances” to keep the case in criminal court. Yet what circumstances are “exceptional” is not defined in any statute.

Further, “Raise the Age” did not change the Juvenile Offender Act of 1978, which allows 14- and 15-year-olds to be prosecuted as adults for certain crimes, including burglary – a common offense charged against minors. Many juvenile offenders will still face significant time in prison for felonies and other serious offenses. Their cases will not be diverted to family court, and they may end up with criminal records.

Fiscal Issues With “Raise the Age”

There are also fiscal issues with New York’s “Raise the Age” changes. Many counties have a limited number of beds for housing juvenile offenders. These localities may have to scramble for funds to build new youth prisons. On top of that, new correctional staff, probation officers, and counselors must be hired. Further, there is the question of the staffing for family courts and youth parts. Governor Cuomo’s bill provided for $100 million in the state’s budget for “Raise the Age,” but some wonder if this will cover all of the costs.

The toughest critics also wonder if the changes to youth housing facilities are really changes at all. They may just be prisons repackaged as social service centers. One facility in the Bronx still has razor wire fences, metal detectors, inmate uniforms, and windowless rooms. It’s unclear if juvenile offenders are really receiving appropriate rehabilitation, counseling, and education.  These facilities may also not be close to the child’s home, and thus incarcerated juveniles may be separated from their families and support systems.

Victims of False Rape Allegations Beginning to Get Justice
Consent in Sex Crime Cases: What Is the Law in New York State?
Rollback of Bail Reform in New York for Certain Offenses
Minor arrest record could hinder future employment