Kidnapping cases often appear front and center in the news. Yet the legal definition is often much different from public perception. It is not just the unknown abductor taking a child away in the night. Kidnapping can be charged against family members or friends. Even simple miscommunication between parties could lead to kidnapping charges. 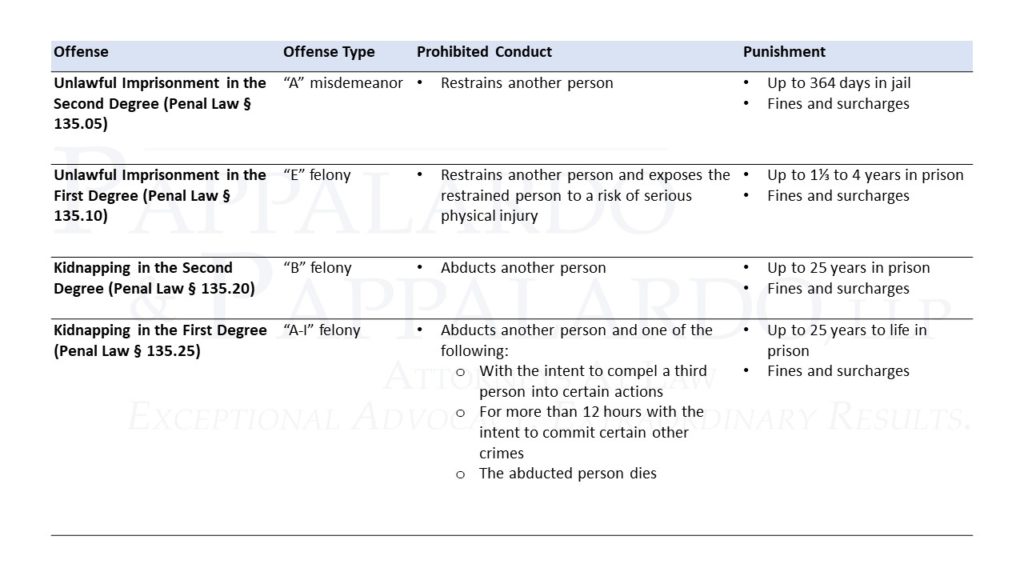 Note that where the victim is less than 17 years old and the defendant is not the parent of the victim, a conviction will subject the defendant to registration in the state of New York as a sex offender.

Defenses to Kidnapping and Unlawful Imprisonment

For both unlawful imprisonment and kidnapping, there is an affirmative defense as defined by statute (Penal Law §§ 135.15, 135.30).

One of the reasons for this may be that many cases involve non-custodial parents taking control of their children. But note that custodial interference is also a criminal offense pursuant to Penal Law §§ 135.45 and 135.50.

Additional defenses may include that the victim consented to the restraint or abduction. This can be tricky, however, when the victim is underage and may not have the legal capacity to consent. It may also be a defense that there was a lack of force or lack of an intent to use force.

If a victim is kidnapped and moved across state lines, the crime becomes a federal offense. Under the Federal Kidnapping Act (commonly referred to as the “Lindbergh Law”), such an offense is punishable by a prison term of up to 20 years. If the victim is under the age of 18 and the defendant is not a close family member or legal custodian, the penalties are even harsher. In such circumstances, the kidnapping is punishable by a mandatory minimum sentence of 20 years. There are also additional penalties for kidnapping a child and taking them across international borders.

New York’s Chief Judge Calls on Courts to Order Prosecutors to Turn Over Information Favorable to De...
Criminal Charges and How They May Affect Your Status in the U.S.
You Received an Appearance Ticket or DAT – Now What?
Predictive Policing: Stopping Crime Before it Starts