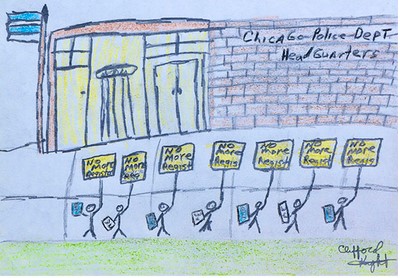 This month, the Drawing Center in NYC will host events which explore the intersection between art and criminal justice. “Our Fellow Americans: A Symposium on Public Conviction Registries” will featuring a variety of presentations and exhibitions. Accordingly, it will include art which communicates the actual impact of sex offender registry laws.

In New York, sex offender registry laws and residency restrictions have had many unintended consequences. Similarly, in Illinois, state law prevents those who are registered as “child sex offenders” to live more than 500 feet from schools, playgrounds, daycare centers, and other child-focused locations. In addition to other state and federal laws, this forces some into dire situations, including homelessness, losing jobs, and separating families. Indeed, persons on the Illinois registry have been held in prison past their release dates due to an inability to obtain housing.

The Chicago 400 is a grassroots campaign of people in Chicago affected by that state’s laws. The group’s art includes drawings that show how they follow the state’s registry and banishment laws. Moreover, the group campaigns to reform registry and banishment laws, using their art in their efforts. Thus, the Drawing Center will be exhibiting their art and discussing the actual human impact of such registry laws.

More information about the events can be found at http://www.drawingcenter.org/en/drawingcenter/5/exhibitions/9/upcoming/2251/meet-the-chicago-400-lessons-in-the-carceral-state/.

After the symposium on January 25, the New York Action Alliance and the Chicago 400 will be hosting a “Next Steps” mixer from 6pm to 8pm. The mixer brings together professionals, advocates, and those directly impacted by registry laws. Register to attend the mixer at https://www.eventbrite.com/e/new-york-action-alliance-chicago-400-mixer-tickets-88401068977 (RSVP deadline January 17).

In essence, NYAA supports policies and laws that hold people accountable for harm, and that help people who have been held accountable to live successful and law-abiding lives. Further, it supports policies that meaningfully invest resources into practices such as survivor services and primary prevention to actually produce public safety, as opposed to creating a false sense of security. Thus the group aims to work with policy makers, professionals, educators, and the public to effect change to make our communities safer.

Image: Anonymous, “Map depicting the enforcement of registration laws.” Courtesy of the Chicago 400.

Why You Should Hire an Attorney When You’re Charged With a Violation
High-Risk HIV Among Incarcerated Populations: Reasons for Prevention Challenges
The Grand Jury and Its Role in the NY Criminal Legal System
A Criminal Defendant’s Waiver of the Right to a Trial by Jury