If a police officer suspects you’ve been driving while intoxicated by drugs or alcohol, he or she will ask you to take a chemical test. New York law assumes that any driver will submit to testing to determine the amount of alcohol or drugs in his/her system. But what happens if you refuse to take that test?

What is a Refusal?

When you’re suspected of driving while under the influence of alcohol, you may be subject to two tests. The first is a portable breath test (PBT), which determines if you’ve consumed any alcohol. But this test doesn’t necessarily determine the amount of alcohol. The second is a chemical breath test, which will determine your blood alcohol content (BAC).

If you’re suspected of driving while under the influence of drugs, you will be asked to submit to either a blood, saliva, or urine test. This may also be used in some cases to test the amount of alcohol.

You may, without facing a serious penalty, refuse to take the PBT; this is a traffic infraction. However, if you refuse to take the chemical test (whether breath, blood, saliva, or urine), the refusal will result in a criminal charge and will trigger a hearing with the DMV.

Can You Refuse the Test?

Before you refuse, you should be given certain warnings by a police officer. These warnings must indicate that refusal may result in the revocation of your license for at least one year. 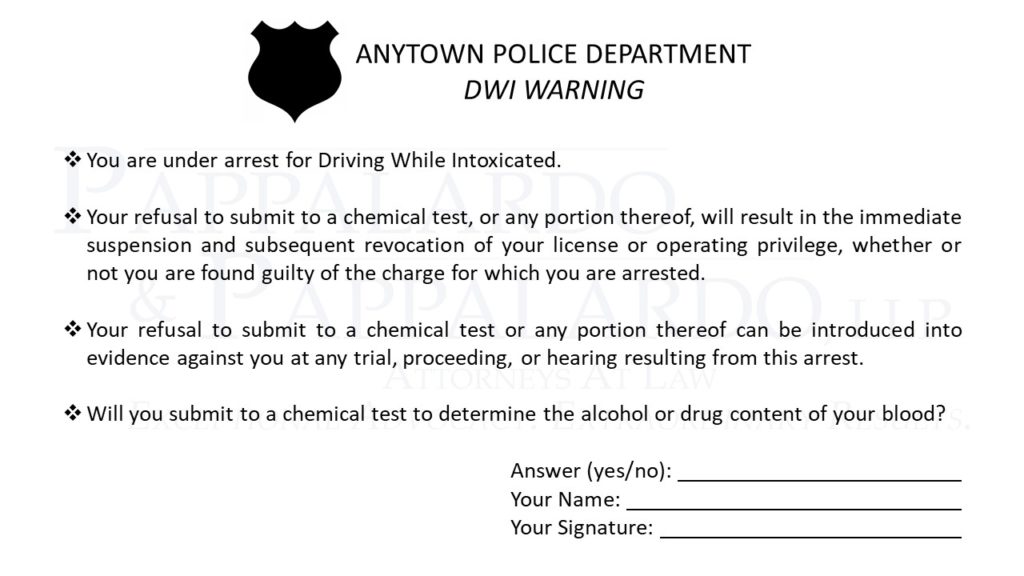 Legally, you can refuse to take the chemical test under certain limited circumstances, which we address below. Regardless of whether you have legal grounds, if you refuse the test your license will be promptly suspended for 15 days. Then, within those 15 days, you will have a hearing at the DMV’s Division of Safety & Business Hearings.

What Happens at the Refusal Hearing?

At the hearing, the police officer must show by a preponderance of the evidence that:

If you can prove one of these elements didn’t exist, you can win the refusal hearing.

An administrative law judge (ALJ) presides over these proceedings. If the officer does not show at the first appearance, the hearing will be adjourned. If this happens, your driving privilege will be restored.

At a re-scheduled hearing, if the officer again does not appear, the hearing will go forward in his/her absence. The ALJ will make his/her findings of fact based on the paperwork prepared by the police officer.

If the officer does appear, the ALJ will take testimony from the officer. Your defense attorney will also have the opportunity to cross examine him/her. And you will be able to introduce evidence about whether you refused the test.

Penalties if You Refuse

The penalties for refusal involve driver’s license revocation and civil fines. It’s important to note these are separate from anything coming about because of the DWI criminal case.

The minimum penalty is a one-year license revocation and a $500 civil fine. At the end of the one-year, you must re-apply for your license. Your privilege to drive is not automatically re-instated.

Penalties increase based on your prior driving history. The revocation can go up to a minimum of 18 months, and the civil fine will go up to $750. The revocation period can be for life under certain circumstances. Finally, there are additional penalties for drivers with a commercial driver’s license (CDL).