New York previously considered the legalization of recreational marijuana. And in 2019, laws went into effect which decriminalized the drug. Yet possessing small amounts of marijuana would still result in fines.

Now, the state’s Governor has signed into law a bill providing for the legalization of recreational marijuana. The bill will also allow a regulated market for the distribution and sale of marijuana.

The Marijuana Regulation and Taxation Act

The bill’s name is the Marijuana Regulation and Taxation Act (MRTA) (S.854-A/A.1248-A). In sum, the MRTA legalizes the production, distribution, sale, possession, and use of marijuana.

The MRTA creates the Office of Cannabis Management (OCM). Specifically, the OCM will provide oversight, promulgate regulations, and issue licenses. The licenses will be to produce, process, test, dispense, distribute, and deliver marijuana – similar to liquor licenses.

Importantly, the MRTA will inhibit access to marijuana by anyone under 21 years of age. Youths can still be charged with infractions and will be required to attend drug awareness education, counseling, and community service. And those selling marijuana to youths will face criminal charges and loss of their license to sell the drug.

The MRTA went into effect immediately (March 31, 2021). However, it could take 18 months or longer for sales to begin as the OCM establishes rules and regulations and begins to issue licenses.

What About Prior Marijuana-Related Convictions?

Notably, the MRTA does not include broad felony disqualifications for licensing and employment. Rather, licensing and employment will be restricted from those who have convicted of crimes such as fraud or tax evasion which relate to owning and operating a business. And the bill creates a social and economic equity program to assist individuals disproportionately impacted by cannabis enforcement that want to participate in the industry.

Note that it will still be a crime to drive while one’s ability is impaired by marijuana. As discussed in a recent blog, this is because a driver’s response time is affected by the THC in marijuana, or they may experience hallucinations or visual distortions from THC.

Tax revenue is projected to reach $350 million annually and will create 30,000 to 60,000 new jobs. Forty percent of the tax revenue from the legalization of marijuana will go to a newly-created Community Grants Reinvestment Fund. The fund will provide for community-based projects. Such projects will include job training, expansion of afterschool programs, adult education services, and re-entry services.

Another 40% of the tax revenue will go to the state’s Department of Education. This money will be used to keep public schools open and enhance the education offered to the state’s children. Lastly, the remaining 20% will go toward funding drug treatment programs, public education campaigns, and research on the health impacts of legalizing marijuana. 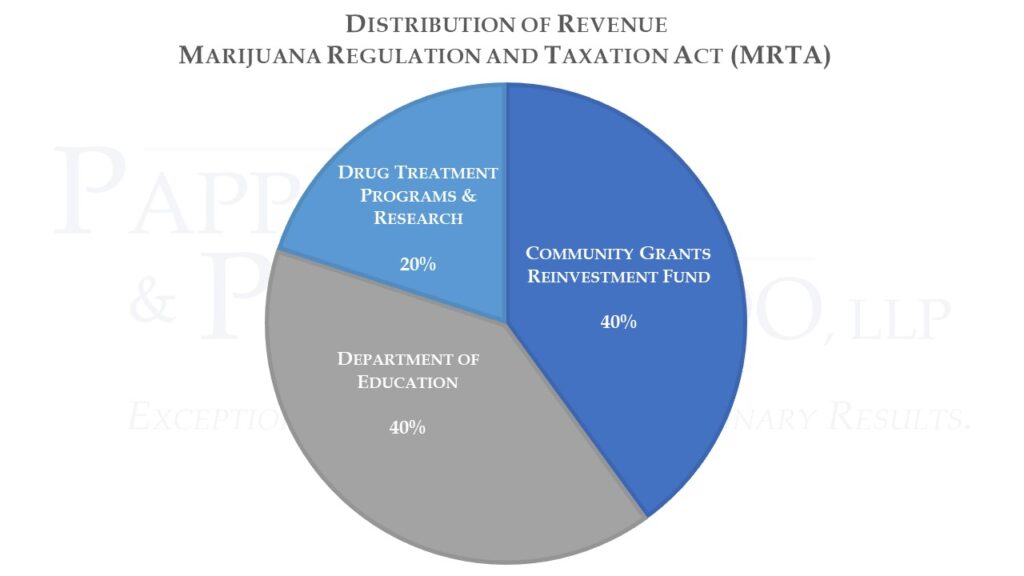