PLEASE NOTE: At our office, we have received a number of calls regarding the proposed Clean Slate Act. This blog is about a proposed law that is not yet in force. As of March 2022, the Clean Slate Act has not yet been passed by the Legislature or signed into law by the Governor.

The Clean Slate Act has been proposed to the New York State senate and assembly (S.1553A/A.6399). What would the bill do? It would provide for automatic sealing of certain criminal convictions after a statutory waiting period.

How the Clean Slate Act Would Work

The Clean Slate Act would amend various sections of New York law. It would allow for the automatic sealing of certain criminal convictions. Click the info-graphic below to learn more. 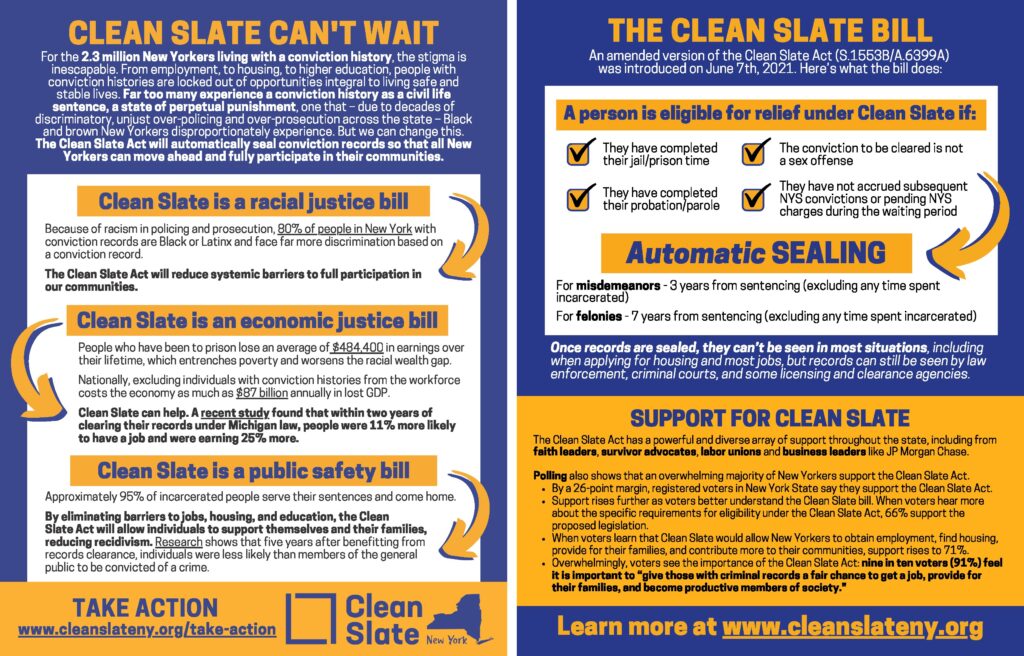 The state legislature returns to session in January 2022 to consider the bill.

Justification for the Clean Slate Act

Once an individual’s “debt to society” is paid, justice demands that the individual not be punished further in connection with employment, housing, obtaining credit, and many additional areas essential for successful participation in one’s community. This Act will provide such individuals with a Clean Slate to move on with their lives and not be punished in perpetuity. It aims to end perpetual punishment by requiring the expungement of certain records subject to a variety of conditions and exceptions, making it illegal and a violation of Human Rights to unlawfully disseminate any information that has been expunged.

Over 70 million Americans have a criminal record, and 2.3 million of them are New Yorkers. According to the Campaign, convictions keep people from opportunities like employment and housing. There are also statistics which suggest that convictions disproportionately affect communities of color. As many as 80% of those in New York with criminal convictions are people of color.

While New York passed a law in 2017 to allow for the sealing of convictions, the Campaign says this hasn’t done enough. Less than 1% of those eligible have been able to have their convictions sealed.

Despite the absence of any evidence that they re-offend at higher rates, those convicted of sex offenses are excepted from the Clean Slate Act. This means that they can never have their convictions sealed.

Yet in New York’s bill, there is no justification for such exceptions. In reality, data shows recidivism for those who have committed sex offenses is quite low. In fact, statistics show that those convicted of sex offenses are much less likely than people convicted of other offenses to be re-arrested or go back to prison.