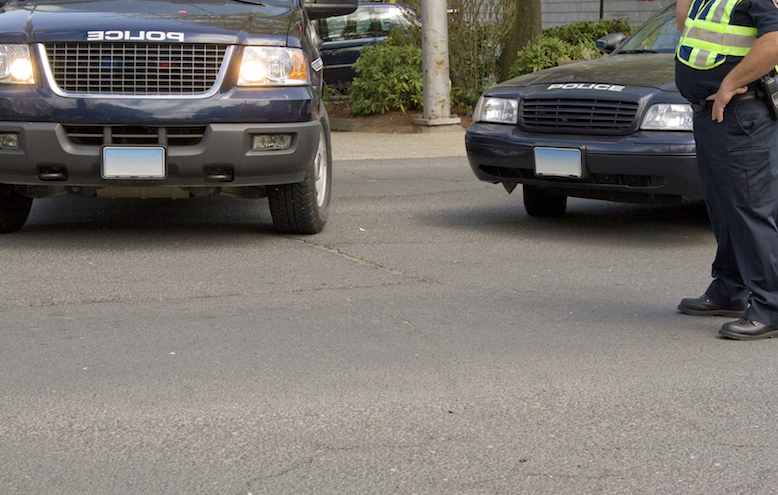 From left, Officer Michael McGhee, former New York City officer Thomas Wimmer, Patrick Tully of the Bronx, Officer Stella Ibanez and Officer Jeffrey Alicea. The officers and Mr. Tully are charged with misdemeanors resulting from a fight outside a bar.

WHITE PLAINS — Four New York City police officers were charged Friday over their roles in a late-night brawl in Yonkers in September in which a man suffered a cracked skull outside a strip of Irish pubs.

The charges, all misdemeanors, capped a five-month investigation by three law enforcement agencies into a chaotic series of events involving off-duty and on-duty officers who had converged on McLean Avenue, just over the Bronx border.

One of the four officers recently resigned. The three others were suspended without pay after their arraignment on Friday in Yonkers.

According to the Westchester County district attorney’s office, on Sept. 14, just after 3 a.m., two off-duty New York City officers and a friend exchanged insulting words with the female friend of a man outside a bar. A fight erupted on the sidewalk just as two New York City officers on routine patrol arrived, having briefly crossed over the border into Yonkers.

Those patrol officers, Jeffrey Alicea, 32, and Stella Ibanez, 39, saw one of the off-duty officers, who was later identified as Michael McGhee, strike the victim, Peter Cummins, prosecutors said. The officers immediately intervened, handcuffing Officer McGhee, who identified himself as a New York City police officer. Law enforcement officials said that the responding officers then released Officer McGhee, letting him leave.

A statement released by the district attorney’s office said that Officers Ibanez and Alicea “later agreed to concoct a story, that if asked, the person detained at the incident was not a police officer.”

The two off-duty officers, Mr. McGhee, 30, and Thomas Wimmer, 25, and their friend, Patrick Tully, all of the Bronx, were charged with one count of third-degree assault. Officers Ibanez and Alicea, also of the Bronx, were each charged with two counts of official misconduct. All five defendants face a maximum sentence of a year in jail if convicted.

But there were unanswered questions on Friday, particularly as to what information the responding New York City officers gave to the Yonkers police about the fight. The Yonkers police arrived shortly after Officer McGhee was released, officials said, and summoned medical attention for Mr. Cummins, who suffered permanent damage to his left eye.

The commissioner of the Yonkers Police Department, Edmund Hartnett, said that his own officer was unaware that someone had been briefly detained at the scene. “When he got there, nobody told him that someone was apprehended and released,” Mr. Hartnett said.

That officer indicated in a Yonkers police report only that there were “injuries undetermined at this time.” Within days, however, the Yonkers police “started getting phone calls and information that there was more to this,” said Mr. Hartnett, adding that his department worked closely with the district attorney’s office and the New York City Police Department’s Bureau of Internal Affairs.

Howard E. Tanner, the lawyer representing Officer McGhee, said in a phone interview that his client “didn’t assault anyone,” adding, “We look forward to trying the case, and I’m sure he will be exonerated.”

A lawyer for Officer Wimmer, Richard Murray, said that his client’s resignation within the last two weeks was not directly related to the investigation. Officer Wimmer had been placed on modified desk duty with no opportunity for overtime pay. “He was not pressured or told to resign,” he said. “There was another economic opportunity, and these charges were facing him.”

Mr. Murray said that Officer Wimmer did not assault the victim. “The victim grabs Tully, and Wimmer pulled him off, and that’s basically the extent of Wimmer’s involvement,” he said in a phone interview.

Meanwhile, Officer Ibanez said through her lawyer, John D. Pappalardo, that she did not cover up anything. “There was no concocted story,” he said. A lawyer for Officer Alicea, John Patten, said in a news conference outside the arraignment that his client was a “good police officer, a good fellow, and he told the truth when he came down to the D.A.’s office.”

It was not the first time that New York City police officers have made headlines on McLean Avenue, a rollicking night spot. In 2006, an off-duty police officer shot and killed a 20-year-old man outside a bar after the man stabbed another off-duty officer who had been trying to settle a dispute.

Use of Jailhouse Informants and Recorded Calls in Criminal Prosecutions
How Stealing an Amazon Package Can Lead to Federal Charges
We're Moving! P&P Moving to White Plains as of May 1, 2020
SCOTUS Strikes “Proper Cause” Requirement in NY Gun Licensing Law