In New York, persons convicted of certain sexual offenses are required to register under the Sex Offender Registration Act, also referred to as “SORA” or “Megan’s Law.” The primary way a court determines a person’s risk of harm to the community and risk of re-offense is by scoring the Risk Assessment Instrument (“RAI”) created by the Board of Examiners of Sex Offenders (“Board”). A court must also abide by a 24-page set of guidelines about how to use the RAI (the “Guidelines“).

How Does the Court Score the RAI? 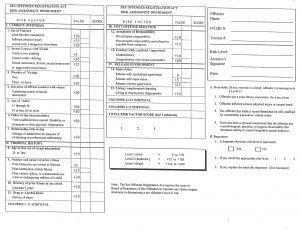 In 2012, the Board issued a one page position statement about how to score the RAI for persons convicted of possessing child pornography. This was in response to several appellate court decisions addressing the issue. The position statement sets forth that the Board recognizes that scoring on the RAI “produces an unintended, anomalous result as the majority of offenders convicted of child pornography offenses will be scored the same when there are clearly vast differences amongst these types of offenders.” 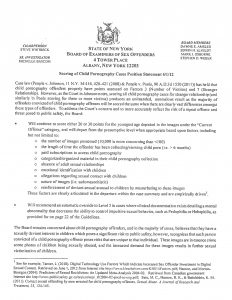 Notably, however, most of the so-called “science” cited by the Board in creating this position statement doesn’t support the Board’s suggested aggravating factors. One source cited is merely a recounting of factors which the author, a self-described “cyber crime analyst,” has personally observed – it is not a scientific study. Another study cited by the Board dealt not with persons who possessed child pornography, but rather those who committed contact offenses and thus does not address what could be aggravating factors for internet crimes. The third source cited found that aggravating factors include prior criminal history, substance use problems, sexual interest in children, low education, intimacy deficits, and anti-social behavior – not the factors cited in the Board’s position statement.

The Board has known about the issue of scoring child pornography cases since at least 2008, yet it has declined to do anything to change the RAI. The Board hasn’t even updated their position statement, which was issued in 2012, based on more recent updates in the law.

Most professionals who assess and treat people who’ve committed sex offenses don’t use the RAI – they use scientifically-validated risk assessment instruments to determine a person’s risk of re-offense. There is a consensus among professionals who treat persons convicted of sex offenses, backed by peer-reviewed research, that recidivism isn’t correlated to the perceived heinousness of past offenses. Even still, a New York appellate court decided in late 2017 that courts don’t have to consider scientifically-reliable tests in determining a person’s appropriate risk level – indeed, judges are allowed to ignore this science in its entirety.

Recent Success In Challenging the RAI

Pappalardo & Pappalardo, LLP has had success in challenging the flawed RAI for clients charged with possession of child pornography. In August of 2018, attorney Jill K. Sanders represented a client who the Westchester County District Attorney’s Office wanted to make a Level 2 offender. In a hearing before the Westchester County Supreme Court, Ms. Sanders was able to demonstrate the issues with the scoring of the RAI, particularly where the client had been convicted of possessing a handful of images more than a decade ago. A full psycho-sexual evaluation, in which three scientifically-validated risk assessment instruments were administered, was submitted as evidence that the client was a low-risk of re-offense. The judge agreed that the evaluation was reliable evidence of a lower risk, and a downward departure was granted. The client was adjudicated a Level 1 and will not be pictured on the Internet with his home and work addresses.

What is Restitution, and Will You Have to Pay it?
Incarcerated Parent – The Impacts on Child Custody and Support
Decriminalization of Marijuana in New York
Carfentanil – An Opioid More Dangerous Than Fentanyl