Assault is one of the most common charges in the criminal legal system in New York. Yet many don’t understand why its charged sometimes as a misdemeanor, and sometimes as a felony. Further, there are other aggravating factors which change the offense with which a defendant is charged. Here, we explain the basic differences in the types of assault charges in New York.

Simple assault is an A misdemeanor, punishable by up to one year in jail. A sentence for this crime could also be a conditional discharge or three years’ probation. This is charged when the defendant:

Many times, assault is charges as a felony. If charged with a felony, this means that the defendant is facing state prison. Specifically, Assault in the Second Degree is a D felony, while Assault in the First Degree is a B felony.

Often times, the charge is elevated because the injury to the victim is considered serious. “Serious physical injury” means physical injury which creates a substantial risk of death, or causes long-term impairment of health, disfigurement, or loss of function of an organ.

Moreover, the felony charge also includes cases involving the use of gun or drugs used to incapacitate the victim. Additionally, a felony can be charged if the injuries occurred during the commission of another felony, or in cases where the crime occurs on school grounds.

There are several other types of felony assault other than those discussed above. Aggravating circumstances triggering these types of charges include:

In addition to the felonies of first- and second-degree assault, there are many other felony assault offenses: 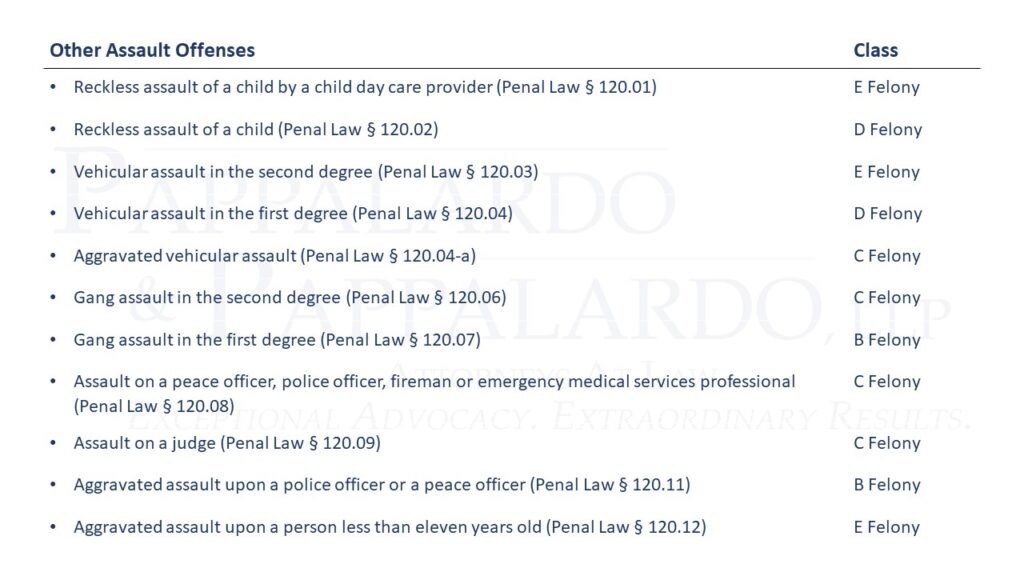