In New York, persons convicted of certain sexual offenses are required to register under the Sex Offender Registration Act (“SORA”). They are assigned a risk level, mostly determined by their score on New York’s Risk Assessment Instrument (“RAI”). However, the RAI is based on outdated research. And it has never been validated by professionals. Moreover, it has been criticized by numerous experts in the field.

How Risk Levels Are Determined

The registry has three levels of persons convicted of sex offenses. Level 3 is considered high risk, Level 2 is moderate risk, and Level 1 is low risk. Additionally, the level can also be modified based on positive changes a person makes in their life after being convicted, as we covered in a previous blog.

The level is determined mostly based on the resulting score from the RAI, which was created by the Board of Examiners of Sex Offenders (“Board”). And there is a 24-page set of guidelines about how to use the RAI (the “Guidelines”). The RAI considers fifteen factors in four categories: current offense, criminal history, post-offense behavior, and release environment. Possible scores range from 0 to 305. 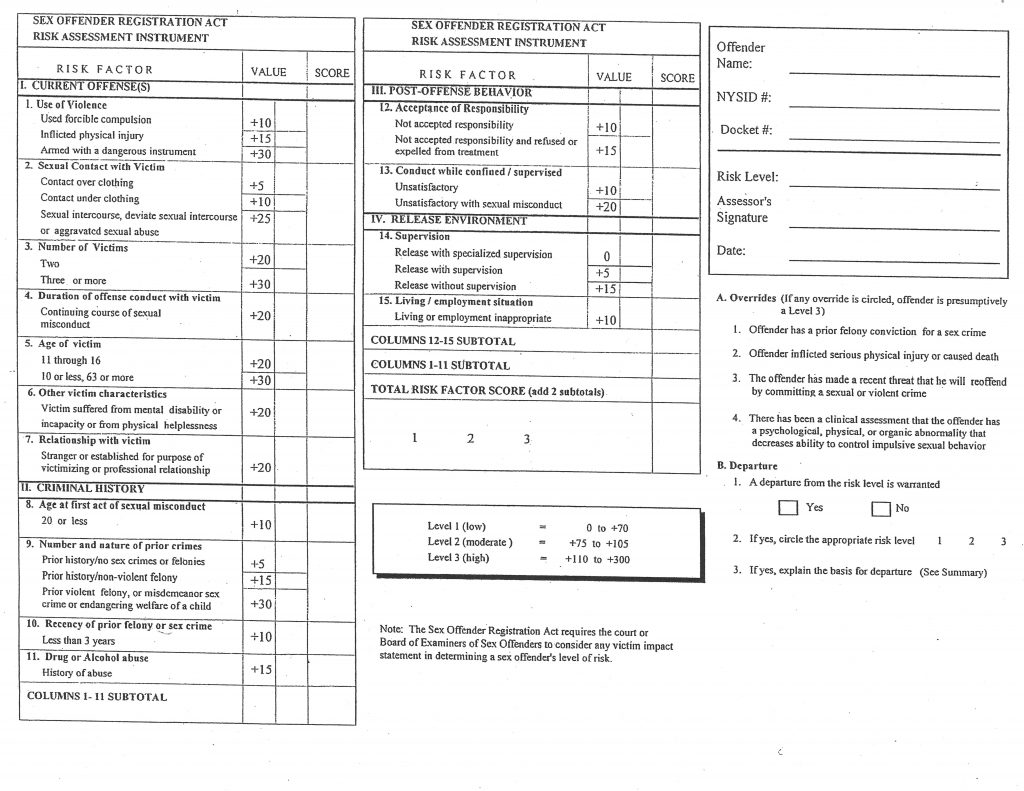 Problems With the RAI

It’s Outdated: Our blog previously highlighted that the RAI was created 25 years ago, and the Guidelines haven’t been updated since 2006. Specifically, there have been no changes to the RAI since it was created. Yet most advances in the field of predicting rates of re-offense have occurred during that time frame. For example, the RAI fails to include risk factors which, in the last three decades, have been found by researchers to more accurately predict risk of re-offense.

It Was Designed Arbitrarily: There is a consensus among professionals that recidivism isn’t correlated to the perceived heinousness of past offenses. Moreover, the number of points assigned to each factor on the RAI has no rationale. For example, Level 3 (purportedly for those of at highest risk of re-offense) makes up 63% of the total scale on the RAI, while low risk covers 23% and moderate risk takes up only 10% of the scale. Yet study after study shows that risk of re-offense is actually much lower.

It’s Never Been Validated: Most professionals who assess and treat people who’ve committed sex offenses never use the RAI – they use scientifically-validated assessment instruments to determine a person’s risk of re-offense. Specifically, there is no research showing the RAI is accurate in predicting risk of re-offense. And many of the factors on the RAI have not been found by researchers to be relevant to determining risk.

How Flaws in the RAI Affect the Community

If people on the registry aren’t given an accurate risk level, the entire purpose of SORA is defeated. The risk level is meant to put the community on notice. Yet if a dangerous person is labeled a low risk because of the flawed RAI, the community is no safer. And, the opposite is true as well. Further, labeling too many people as high risk, which occurs using New York’s RAI, obscures the reality that most people who commit sex offenses will never re-offend. With so many listed on the public registry, it has become meaningless.

Because so many persons are on New York’s registry, the resources to track this population are strained. As of November 9, 2020, there are more than 42,000 persons on New York’s registry. Registrants with inaccurately high risk levels divert resources away from other law enforcement priorities. Conversely, those who are given lower risk levels may not be sufficiently monitored and may present a greater threat to public safety.

The outdated RAI also affects people on the registry and their families. It is punitive to people who are shunned as a result of their risk levels. The risk levels can affect housing and employment opportunities. Persons may be separated from their families and support systems. There may also be residency restrictions related to a person’s level. Such restrictions may actually increase the likelihood of a person re-offending.

Proposed Bill to Change the RAI

The proposed legislation would overhaul New York’s RAI without radically changing the state’s registration system. The bill would require the Board to use a validated assessment instrument when making its recommendations. It would also require the Board to conduct a study of the instrument within the first two years of the bill’s effective date. Thereafter, the Board must validate the instrument every five years to ensure that it remains predictive of risk of re-offense. The reports by the Board must be submitted to the governor and the legislature explaining the findings and recommending changes to the assessment instrument.

NY’s Central Register of Child Abuse and Maltreatment
SARA Residency Restriction Mis-Applied to Prisoners in DOCCS Custody
New York’s Chief Judge Calls on Courts to Order Prosecutors to Turn Over Information Favorable to De...
Calls Recorded By Jails Can Be Used By Prosecutors