When police make an arrest, one of two things will happen. In one scenario, a person can be fingerprinted, processed, and held until they see a judge at arraignment.

Alternatively, an arresting officer can issue a DAT. A person can be fingerprinted, processed, and released with a summons to appear in court at a later date. In some circumstances, the person may be released without bail. And in other cases, police can require a bail before being released with the DAT.

In other cases, police issue an appearance ticket (sometimes called a summons). With an appearance ticket, a defendant is not held or processed and must simply appear in court to answer the charges. They may go through processing (fingerprinting, photographing, etc.) at some point later in the case.

Note that if you were issued a summons in New York City, you may be able to find information online at www.MySummons.NYC.

Sample of one type of summons issued in NYC. 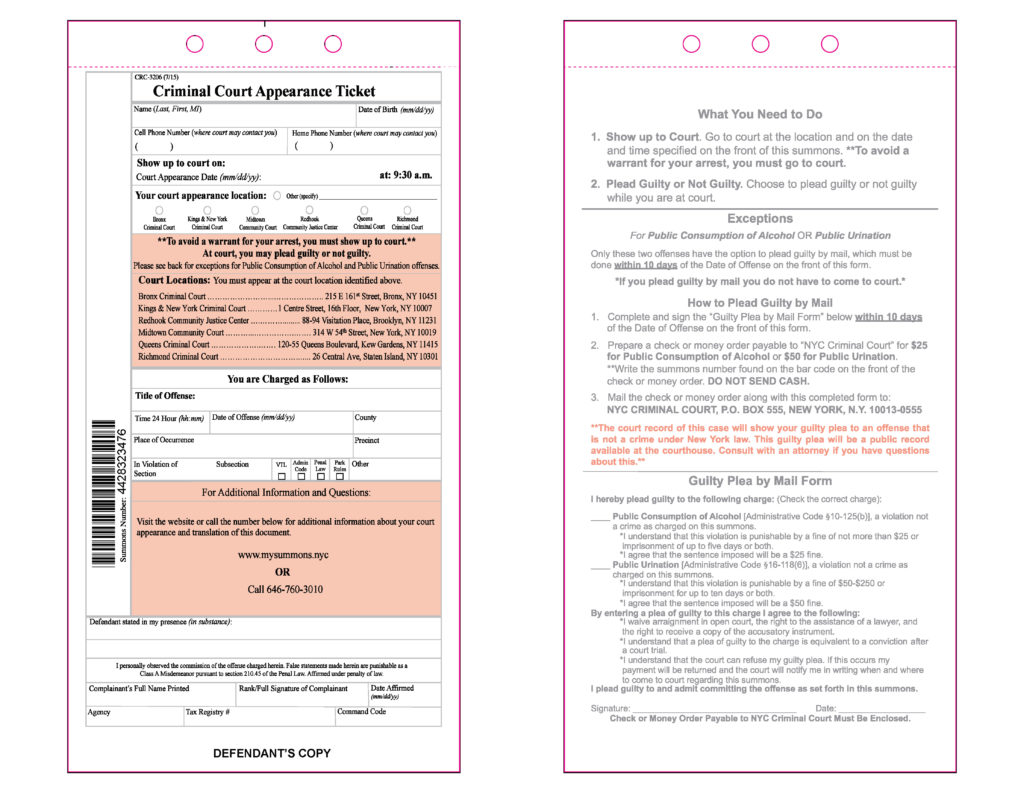 As discussed in our recent blog, beginning next year, appearance tickets will now be issued in many cases. Starting January 1, 2020, all persons charged with misdemeanors or E felonies (with some exceptions) must be released with an appearance ticket.

Being arrested and given a DAT or being held for arraignment will still occur for those charge with higher-level felonies, violent felonies, certain domestic violence crimes, sex offenses, bail jumping, and escape offenses. It can also happen when a defendant’s license can be suspended, or if an order of protection can be issued.

What to Do When You Receive an Appearance Ticket or DAT

The short answer is call an experienced criminal defense attorney. You may think if you received an appearance ticket or DAT, the charges against you aren’t that serious. This is not the case.

For example, you may be issued a DAT for an offense that is punishable by years in state prison. And in some cases, time may be of the essence. In that time, valuable evidence and witnesses may be lost. Speaking with an attorney and working on your case as soon as possible are imperative when facing any criminal charge.